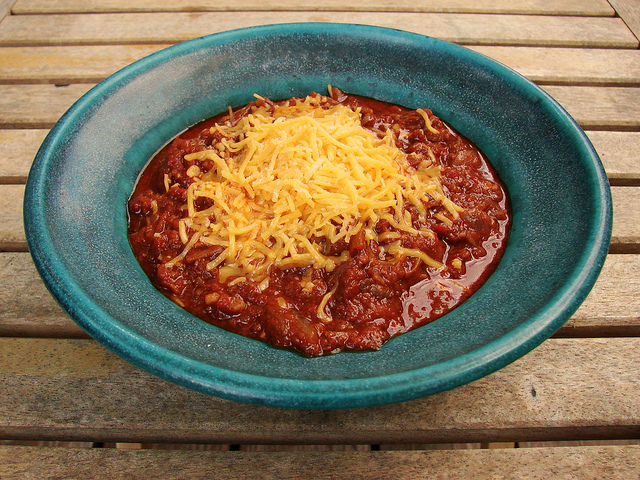 What to with a bumper crop of garden-fresh tomatoes and several trimmed rib tips? Make chili, of course! I have harvested over 30 pounds of tomatoes from our humble garden in the last three days.  This followed a recent BBQ session when I smoked several racks of ribs in a variety of cuts.  While preparing for that BBQ, I found

a good deal on a couple of racks of spare ribs, so I bought and  trimmed them. With a little easy cutting,  one is able to get St. Louis cut ribs (yum!) and have rib tips left over for something else.  Perfect for chili! (click here for more about cuts of ribs)

The smoker was filled with racks of ribs so there was no room left over for the tips.  I put the tips and trimming in the slow-cooker on high for three hours with nothing more than a generous dose of freshly cracked black pepper. After three hours I put them on low the next 8 hours or so (overnight). This magic allows the connective tissues to soften and a large portion of the fat to render out.  The fork-tender rib tips were ready.

This is where I had hoped to share with you the details of the amazing magical chili my wife cooked up using these slow-cooked rib tips.

“I don’t know, I just did it.” she replied modestly

“Can you give me your recipe for my blog? I’ll give you credit.”

“Recipe?” she exclaimed. “There is no recipe for my chili.  It’s alchemy.” The modesty had evaporated.

She insisted that she didn’t make it using anything that resembled a traditional approach to chili, partly because the meat was already slow-cooked, partly because there is an art to melding the spices and flavors of chili.  OK, OK… I admit there is an art to it, one she is very good at, but that doesn’t help me share these incredible flavors with you.  I persisted in my requests, she insisted the secrets to her chili would remain hers. It is probably better that way, that the magician doesn’t reveal the secret. There is magic and alchemy in chili.

Here’s what I can tell you and I don’t think I risk being turned into a frog.

(*this is where my alchemist-wife works her magic, and soil where I dare not tread)

Then we ate it.  It was truly fantastic chili, the best I have ever had.

After dinner, the alchemist asked  that I prepare the remaining chili for the freezer. However, after everyone was through with dinner (seconds and some third-servings if truth be told), there were only a couple of servings left.

Chili is even better the next day!