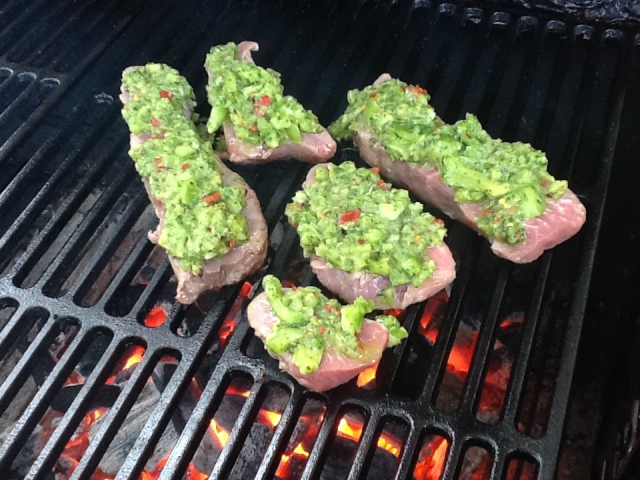 Although the exact origins of this Argentinian sauce and its name are not clear, one thing is certain. It tastes fantastic, especially on seared steak. This fresh elixir of flavor owes its green color to the copious amounts of cilantro while the garlic, onion, lime, herbs, and sweet peppers fuse to form an unimaginable flavor. The fresh sweet peppers give it texture and the spicy peppers give it zip.  It is an amazing complement to just about any meat dish.

Some say the name comes from a butchering of an Irish cook’s name, Jimmy McCurry, who fought for Argentinian independence.  Allegedly his name was mispronounced as Chimichurri.  Such is the stuff of legends.  Others claim the name originates with Basque immigrants to Argentina. Apparently the Basque term “tximitxurri” notes an assortment of things mixed together.  I have yet to find any evidence coming from a linguist, but I will be sure to let you know if I do (is my anthropology geekiness showing?).

Chimichurri is as varied as the people who make it, from the Gauchos of Argentina to the Chefs of Colombia. Essential ingredients include parsley or cilantro (or both), garlic, herbs, oil, and an acidic liquid such red wine vinegar or citrus.  At MeatFireGood.com, we revel in South American flavors by using lime, cilantro,  and a touch of hot peppers.  This is how we do it:

Directions
In a food processor combine cilantro, chunked onion, and jalapeno. Mix thoroughly to a medium paste as you slowly add the oil.  Add remaining ingredients and pulse until mixed slightly.  Adjust salt to taste. Do not over mix — Chimichurri is best with small chunks of peppers for added texture.

Use
It is often used as a marinade, basting sauce, served chilled on the table, or even as a flavorful salad dressing.  At MeatFireGood, we love it cooked on the steak right on the grill where dripping sauce vaporizes in the hot coals and impart indescribable flavor.  But be careful. This sauce will bewitch you and you may spend the rest of your days consumed by the pursuit of endless flavor combinations.